Land-based fish farming facilities make it possible to control the underwater environment to a much higher degree than in the ocean. Even so, a dangerous gas may develop in these types of facilities, causing the fish to die. Continuous robotic cleaning may be the solution.

An autonomous underwater drone designed to clean land-based fish farming facilities was among the ideas developed by students Vidar Melstveit, Marcus Nickelsen and Peder Teigmo when they were testing out different opportunities in their entrepreneurship studies.

This spring they secured grant money from NTNU Discovery to complete a series of tests. There was one test in particular they wanted to perform, as the outcome could really make or break their entire concept. This test concerned how thousands of smolt would react to a foreign object in their tank. 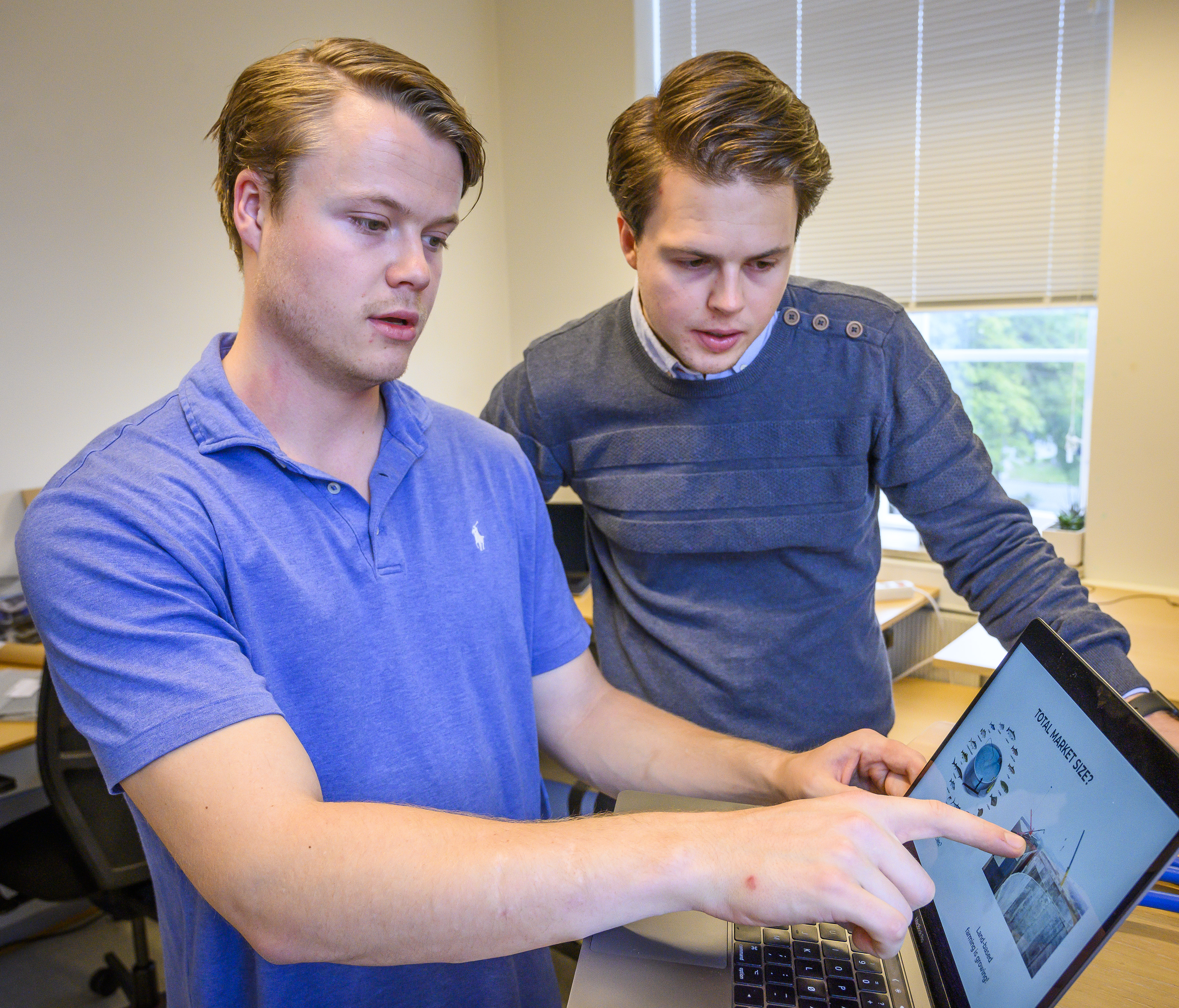 Like pigeons
“Nothing happened!” Vidar Melstveit’s face lights up at the memory. “The smolt really couldn’t care less about this foreign object moving around their environment. We were incredibly relieved.”

“It’s like the pigeons in town. They’re not really keen to get close to you, but they are relaxed around you. That’s exactly how the fish behaved with our prototype,” Marcus Nickelsen says. He is in charge of marketing. “In addition, the robot passed several other critical tests. This opens several possibilities for moving forward.”

We are standing in an office at the NTNU School of Entrepreneurship. This is where Vidar Melstveit, Marcus Nickelsen and Peder Teigmo work on their business concept. Their idea is simply to develop an autonomous underwater drone to clean land-based fish farming facilities.

“We had several different potential projects we were testing out. But this was the one that drew the most attention and the one fish farmers were most interested in discussing. So we figured we really had something to build on,” Vidar says.

Self-contained, but not harmless
Hatcheries consist of huge tanks, holding several thousand cubic feet of water. These tanks hold hundreds of thousands of smolt, before these are transferred to fish-farming cages in the ocean.  Land-based facilities are self-contained, and around 95–99 % of the water is recycled, passing through several purification chambers, where it is exposed to UV treatment, among other things. Even so, there is a certain risk that bacteria may take root, creating a deadly environment inside the tanks.

“The problem occur if the tanks have not been cleaned well enough before the next generation of smolt is introduced,” Vidar Melstveit says.

He has personally worked on facilities, scrubbing these land-based tanks manually. It takes time, and there is no guarantee it will be clean enough. Residue from feed and fish waste can get into every conceivable nook and cranny.

If this fouling is allowed to persist over time, it can create oxygen-poor pockets under water. This, in turn, triggers decomposition, which could generate the extremely toxic gas H2S, which could kill the fish in mere minutes. The cost of such an outbreak is enormous. One thing is the cost of the smolt itself. The loss of potential is approx. 10x this amount. So, we are talking considerable values. 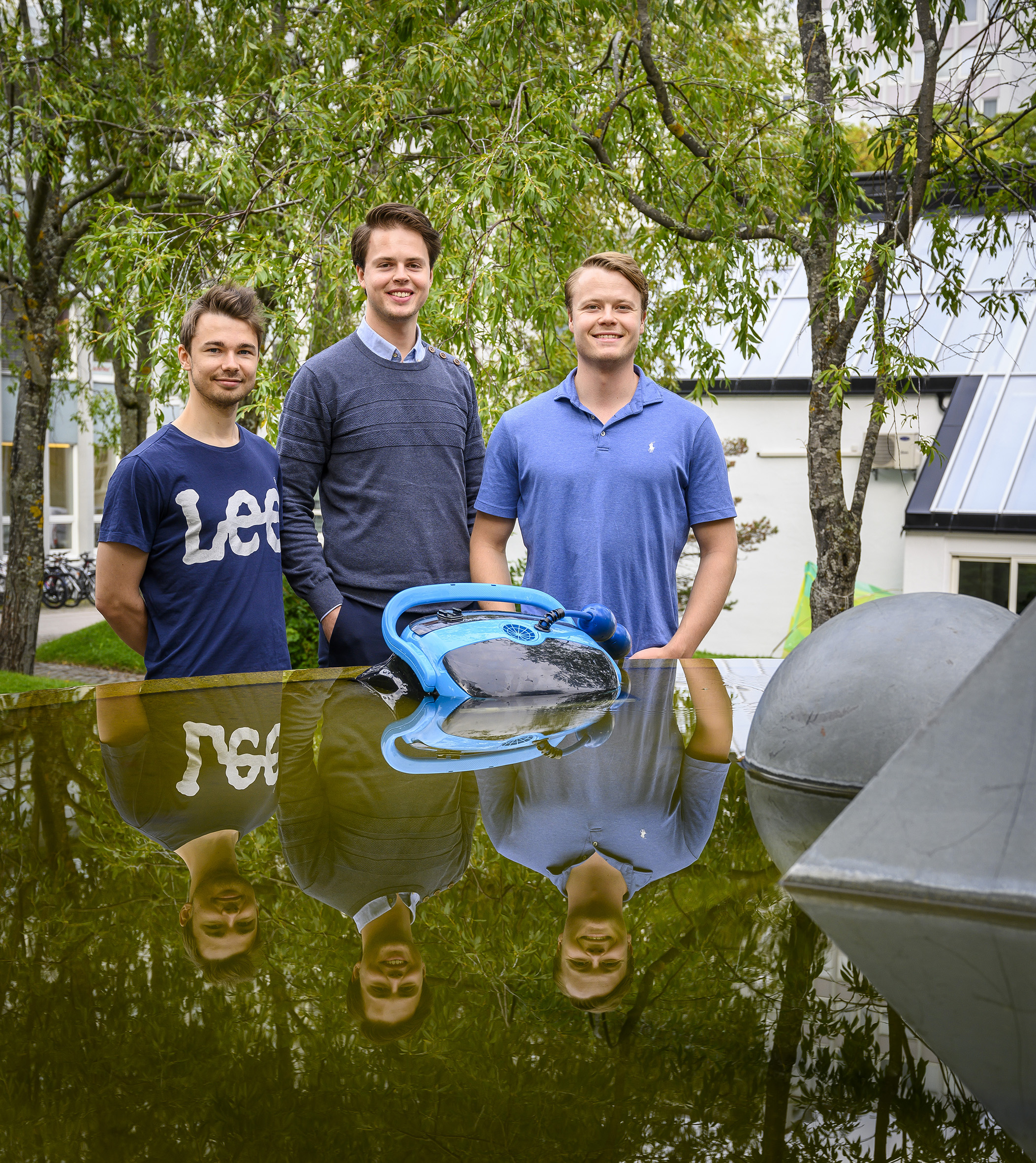 Prevention
Hydrogen sulfide problems won’t affect every farmer, but those who have encountered it are keen to solve the problem, to make sure it does not happen again. The trio believes in prevention – reducing the risk of having an outbreak in the first place.

“I think it’s important to start using our product in a clean tank for maximum effect. You can’t expect good results if you’re starting with a dirty tank. In addition to the fouling, there is also often this kind of slimy film on the walls of the tank. This film should not be left too long, as it increases the risk of bacterial growth. We need to get in before any of this manifests and work preventatively.”

Effective and inexpensive
The team has so far been granted NOK 75,000 in seed money from NTNU Discovery, and they have made deals with fish farmers to test the product in their facilities.

“Going forward, it’s important for us to get as much testing done as we can out in the field with the farmers, and we are planning to improve our product bit by bit,” says Peder Teigmo, who is in charge of product development.

Initial testing was a success, and the team is working hard on planning their next move. Among other things, this means testing the solutions over a longer period of time.

“If we succeed with our product, many fish farmers can reduce downtime at their facility by not having to spend days cleaning a tank before introducing the next generation of smolt,” Marcus Nickelsen says.