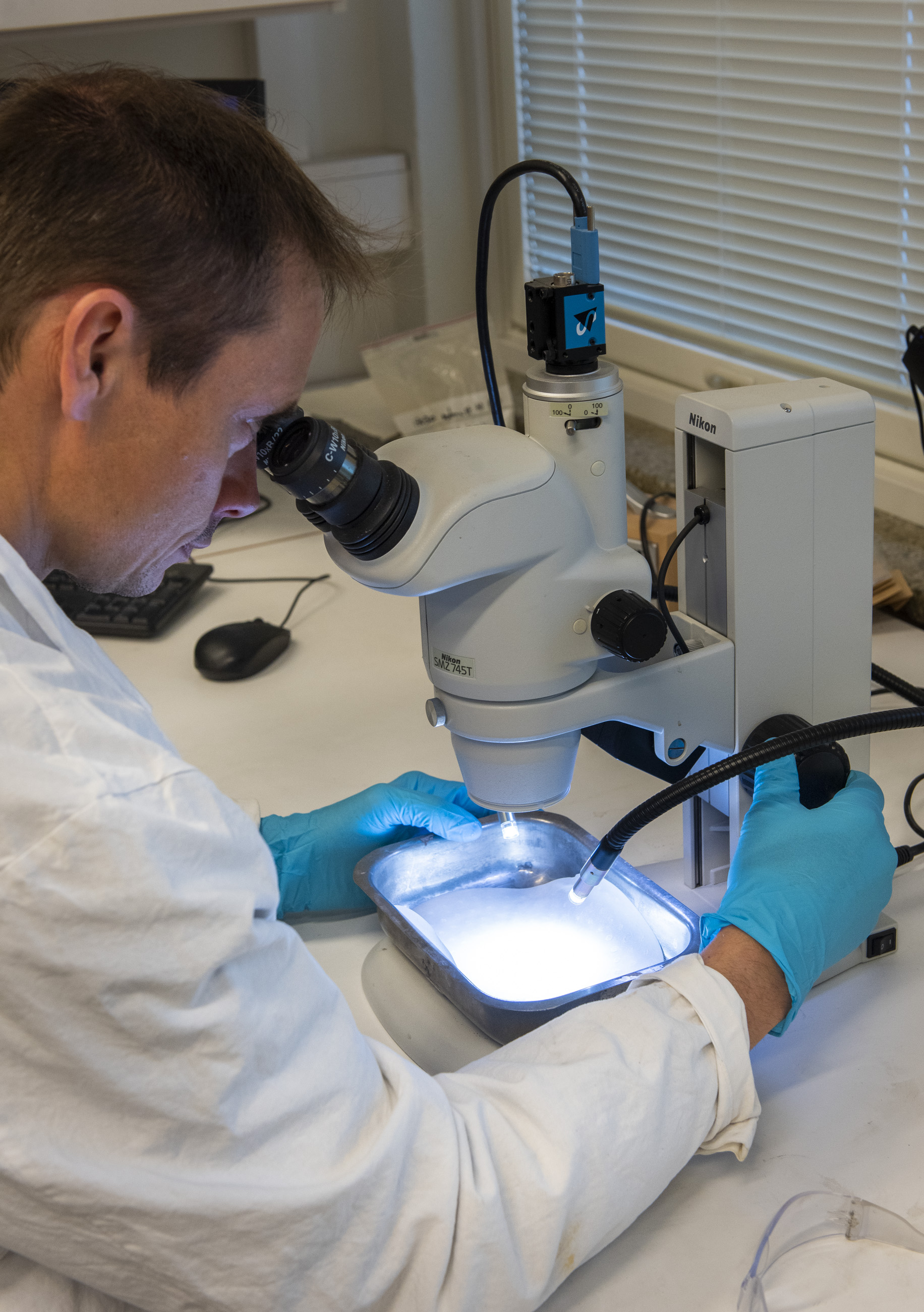 The solar cell industry is booming, and there is an ever-increasing demand for more and better solar cells. Solar cells are currently made from silicon ingots cast in crucibles made from high-purity quartz (A mineral consisting solely of silica) (see illustration 1). Quartz crucibles are expensive, but they still need to be discarded after having been used just a few times, due to cracks and impurities.  The discarded material contains silica (quartz is converted to silica in the casting process), in addition to silicon residue at the bottom of the crucible. These materials are valuable if properly recycled.

This challenge was not new to researchers Erik Larsen and Rolf Arne Kleiv at the Department of Geoscience and Petroleum. They started looking into the possibility of recycling. Erik Larsen had an epiphany when he visited a manufacturer and noticed piles of scrap crucibles outside the factory. “There has to be a way we can fix this,” Larsen thought.

Norway is one of the biggest manufacturers in Europe, but we are still relatively small  compared to the Asian market in terms of silicon casting for solar cell production.

In the lab, Erik Larsen is demonstrating a part of the process they want to test on a large scale. If all goes well, the team behind SiQua hope that the market will embrace the new process.

Great demand, increased production
All in all, solar energy is a very clean way to produce electricity, but new technologies and processes must evolve to make the production of solar panels more energy efficient and environmentally friendly. Less expensive production of extremely high-purity industrial materials is a major challenge. You’d need a combination of high-volume, extreme purity and low cost.

– “The solar cell market is expanding rapidly, and with it, the demand for quartz crucibles. That means we throw away vast quantities of valuable materials that can be recycled and that are attractive to the manufacturer market,” says Erik Larsen.

Larsen has considerable experience working with processes that separate materials, and he has been trying to find out what happens if he changes and refines some key steps in a process called flotation. The idea is to be able to recycle the quartz crucibles to avoid discarding high-purity silica and high-purity silicon. These are materials with a considerable market value.

The team is now confident enough to have put in a patent application. They also applied for funding from NTNU Discovery to help verify that they are able to extract high-purity silica and silicon with the new patentable method.

“With NTNU Discovery’s support, it will be possible to speed up the verification process and start looking for partners,” Larsen says. The recycling process has already been tested in a lab scale.

No competition
–“As far as we know, nobody else is recycling quartz material the way we’re planning to do it,” Erik Larsen says. “Our processes do not require melting or complete chemical dissolution in concentrated solvents, which means the considerable cost associated with types of processes are non-existing. ”

–“Our vision is for the technology to be licensed to a larger actor with enough available resources to invest in a new process and new infrastructure,” Kristin Lønsethagen says. She is a project manager with NTNU Technology Transfer. “The end customer in this commercialization project will be those who manufacture products using high-purity quartz. This includes manufacturers of quartz crucibles, as well as companies who make other products used in semi-conductor technology, telecommunication, optical components, quartz glass products, etc.” 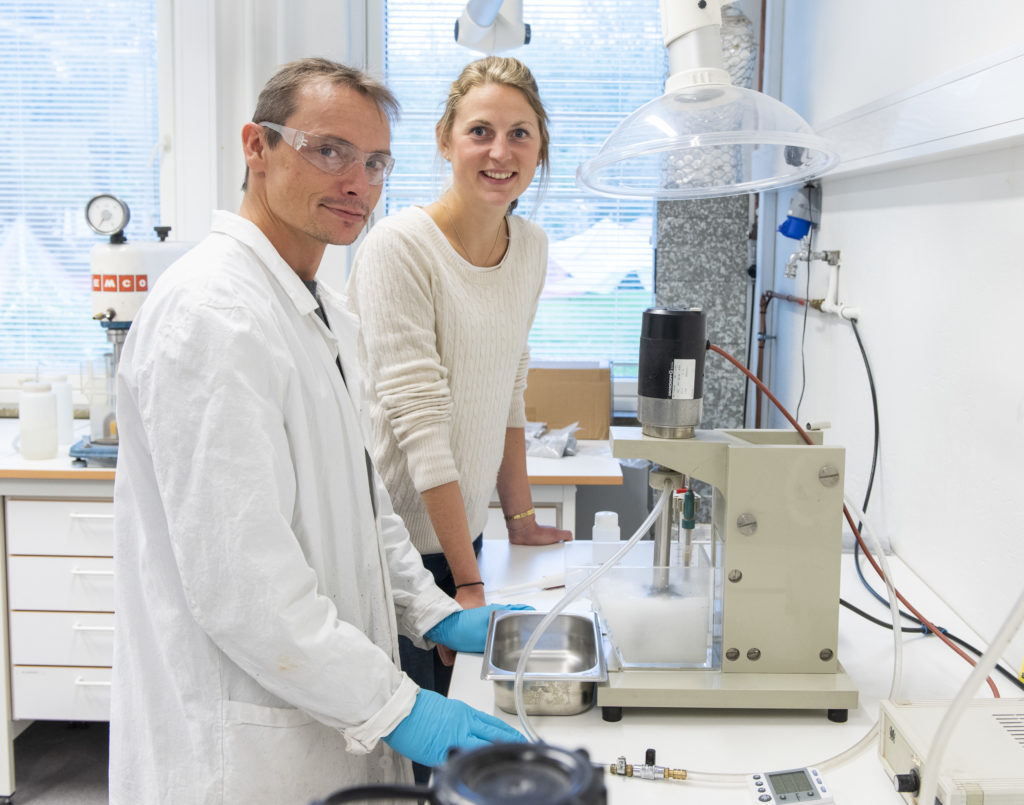 Erik Larsen had an epiphany when he visited a manufacturer and noticed piles of scrap crucibles outside the factory. “There has to be a way we can fix this,” Larsen thought. Here with Kristin Lønsethagen from NTNU TTO.

Several suppliers
By commercializing the recycling process, solar cell manufacturers outside Norway could also become suppliers of quartz crucibles. In Europe, the team has identified several silicon manufacturers they plan to contact in order to find out which quantities of quartz they currently deposit to waste disposal. Norwegian companies such as Norwegian Crystals and NorSun plan to massively increase their production in the years to come, which is an indication of the considerable expansion of the solar cell market. It’s also an indication of the abundant quantities of available quartz material in Europe, which could result in an ample supply of input material for the process. Today, silicon ingot producers pay to deposit their discarded crucibles, so for the time being, the material is readily available at no cost beyond transport.

Erik Hagen, Kristin Lønsethagen and the rest of the team at SiQua are therefore optimistic about the project’s commercial viability.

This is the SiQua-team in Trondheim.

Solar cells: The sun is an unparalleled source of energy. Every year, the Earth is hit by 15,000 times more energy from the sun than what the entire population of the Earth consumes. Even in Norway, the sun provides 1500 times more energy than we consume.* Solar cells convert the sun’s energy into electricity by exploiting the photovoltaic effect. Solar cells can be used directly on buildings, in large solar cell facilities for large-scale energy production, or as a source of electricity in areas with no mains power. Solar cells consist of silicon, which has either been cut into wafers or made into thin-film. Silicon is the second most common element in the Earth’s crust and it is not harmful to health or the environment.

Norway is one of the biggest manufacturers in Europe, but we are still relatively small fish compared to the Asian market in terms of silicon casting for solar cell production. In Norway alone, approx. 1200 tons of crucible materials are discarded every year. High-purity quartz sells for NOK 50–100 per kg, which means that if the discarded quartz crucibles can be recycled instead of going to a landfill, their market value could be up to NOK 60 million a year. To compare, the market value of less pure quartz is NOK 0.5–1 per kg, which means there is a lot to be gained by recycling the quartz material.