Extracting large objects from the stomach

Experiences from the Department of Gastric Surgery at St. Olav’s Hospital led surgeons Ystgaard, Storli and Rekstad to develop a new instrument that makes it easier to extract knives, forks and other large objects patients have swallowed. 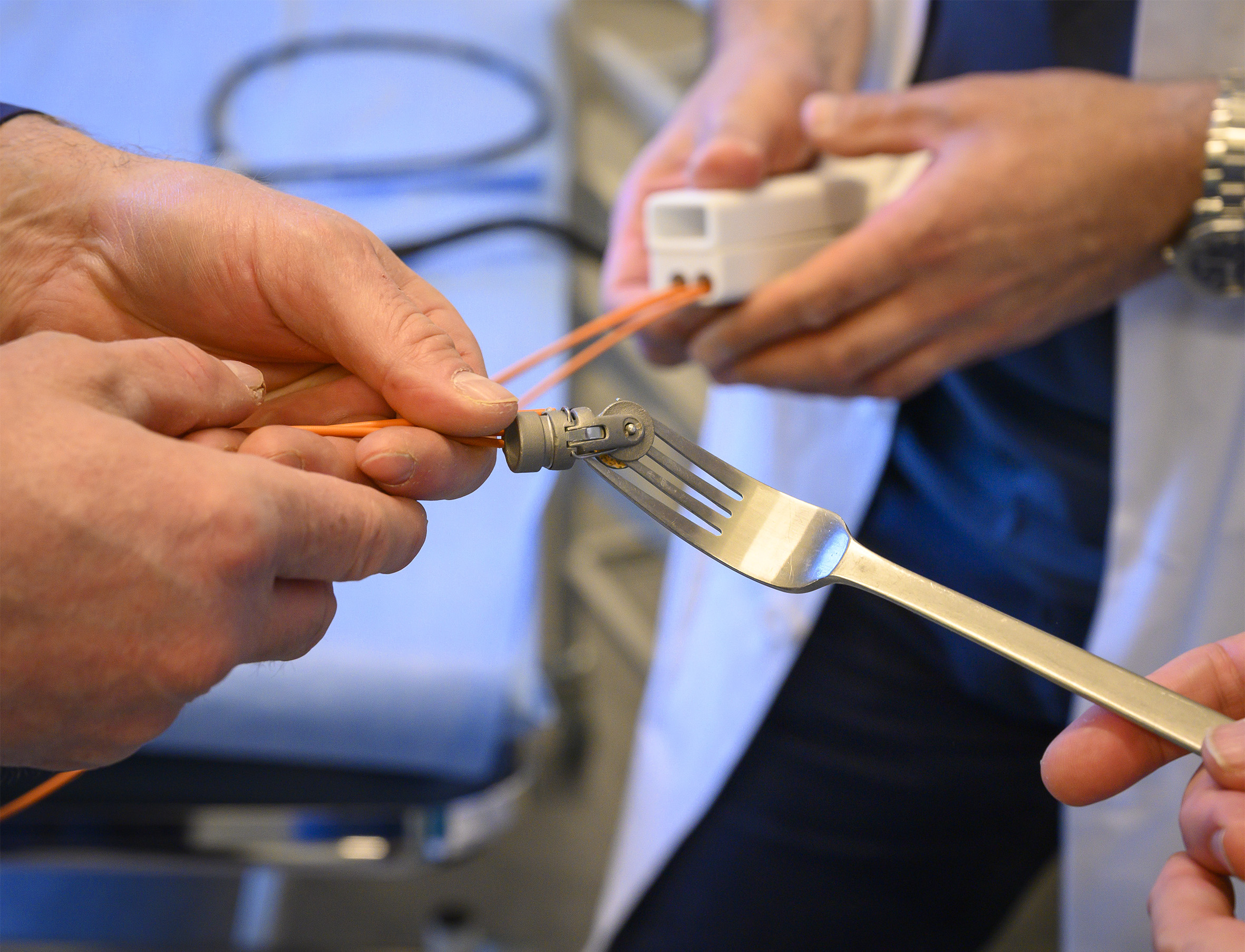 Removing large objects from the stomach is no easy feat. Instruments available today are not well-suited, and it can take a long time to get the foreign body out. In some cases, the object may damage or even puncture the stomach or oesophagus when it is pulled out. The alternative is to put the patient under general anaesthesia and have the object surgically removed, which is very demanding in terms of both time and resources.

“The removal of foreign bodies from the stomach can be extremely technically challenging as well as costly and time-consuming. We want to improve on today’s standard procedure to make it both easier and less intrusive for the patient,” says Lars Cato Rekstad. “We run into this problem a lot, and we want to make it easier on ourselves, and not least on the patient.” 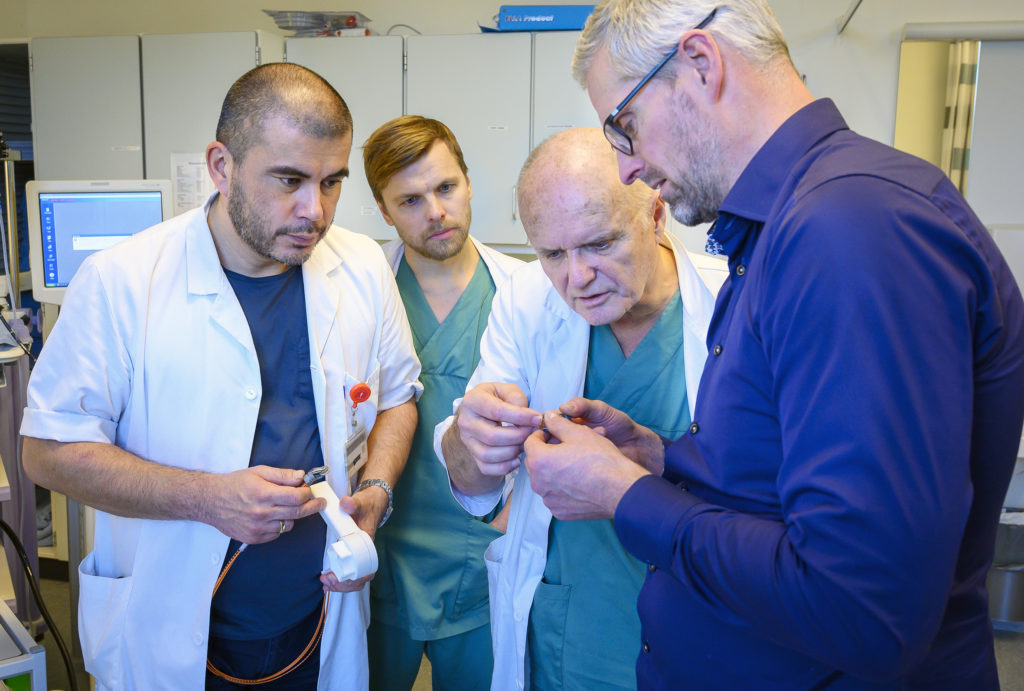 Sick patients
Gastric surgeons often have patients come in with foreign bodies in their stomach.

“It was this last group of patients we primarily had in mind when we developed the new instrument,” says Per Even Storli.

“Patients in this category can sometimes come in several times in the same day to have foreign bodies removed from their stomach. These patients may periodically be very ill, and self-harm is common. They deserve better than what we are currently able to do for them,” says Lars Cato Rekstad.  “Both knives and forks can get stuck in the stomach or oesophagus, and can cause major damage when we try to get them up.”

Ill-equipped
Current instruments use small clamps, pincers, tongs or a type of sling that goes over the object and is pulled tight, to try to pull the object up through the oesophagus. These instruments are designed to remove small objects or collect tissue samples, not to remove large objects. Their grip is limited, and it’s hard to grasp the object that needs to be removed. Trying to get the object out using these instruments can take a very long time, and if doctors are not successful, the patient needs surgery. By developing better instruments, surgeons can save time and patients are spared hours of discomfort.

Quick and efficient
The three inventors have developed a prototype that has already been tested on pigs. The instrument is used in combination with a gastroscope, where a tube with a camera on the end is inserted through the oesophagus.  The new instrument is attached to the end of this tube and consists of a clamp with two round discs, designed to get a good grip on the object it is grabbing on to. Cutlery is often made of smooth metal, and combined with the juices of the stomach it can be difficult to get a good grip.

“We needed a gripping mechanism that was strong enough to hold on to a knife or fork while pulling it out. We can’t have it slip away half-way,” says Ystgaard.

Another key feature is that the discs are moveable. This makes it easier for the surgeon to manoeuvre into the right position to extract the object, which will trail behind the instrument as it pulls out. The discs also protect the mucous membranes from sharp edges as the object is pulled out.  This reduces the risk of damaging the stomach or oesophagus on the way out.

Tests performed indicate that the instrument can remove large objects, such as knives and forks, from the stomach in less than 2 minutes. In comparison, these interventions often take 1–2 hours with the instruments commonly available today. Sometimes, the patient still ends up needing surgery to get the object out. 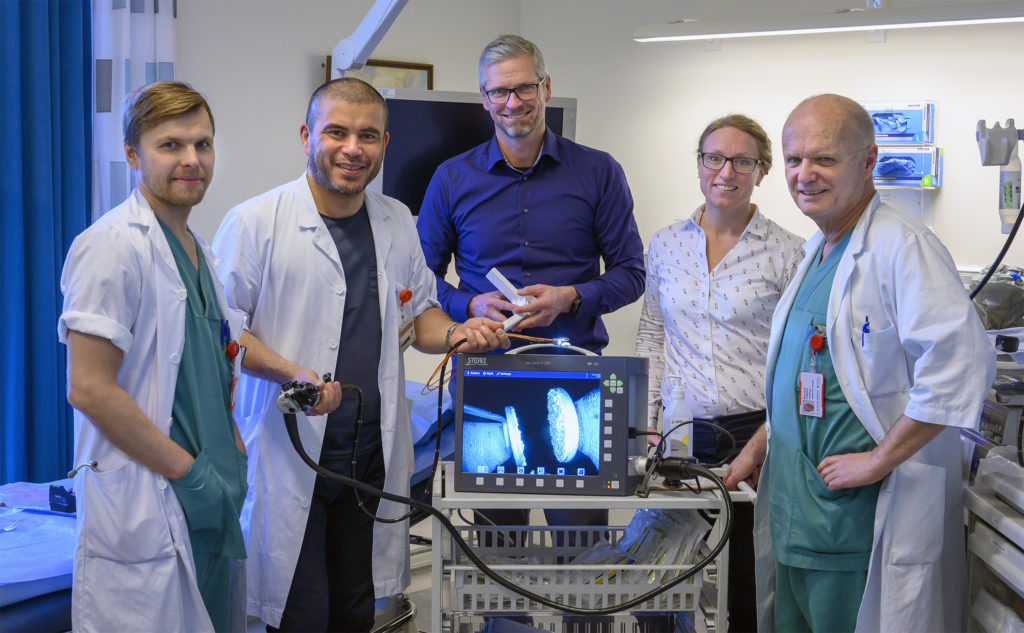 Word of mouth
The prototype has already generated quite a buzz in medical circles. “Paediatric surgeons have already reached out, as they are eager to find new and better tools to extract foreign bodies from the stomach. Children swallow a lot of strange objects, as they don’t know any better,” Rekstad says.

The team also caught the interest of an unexpected group of medical professionals; it turns out there is considerable demand from veterinarians for this type of instrument. The instruments available to vets today is expensive, single-use equipment, and they often have to use several before they succeed, as the clamps tend to break.

“Dogs eat the most incredible things. Mobile phones are common, we’ve been told, and you need some serious equipment to get that out,” says Ystgaard.

“We were able to make this happen because of the amazing community we’re a part of. The technological community at NTNU is only a stone’s throw away, and they’re more than happy to work with doctors on the development. This gives us opportunities few others can match,” Ystgaard elaborates.

With the grant from NTNU Discovery, the researchers now plan to complete the design and optimize the controls for the clamp and handle. This work is carried out in collaboration with the design company Inventas. “In addition, we are in the process of applying to test this out on a larger scale,” says Tonje Steigedal, who is the project manager from the NTNU Technology Transfer Office. “We have to document that this instrument has a clinical utility in both human and veterinary medicine—so-called clinical verification. In humans, this equipment will be single-use, whereas in veterinary medicine the instrument can be used more than once. This also needs testing.

Facts:
Ingestion of foreign bodies is relatively common, with approx. 14 million cases worldwide every year. In approximately 3 million of these cases, the patient needs medical intervention to have the object removed, preferably through gastroscopy, where the object is removed the same way it came in. Large objects can be especially challenging to extract. At St. Olav’s Hospital, doctors remove various metallic and solid foreign bodies (various food items not included) 30 times a year.