It all started as an exchange of ideas over coffee—in a few years, batteries produced using algae could be installed in the next generation of electric cars or in the ferry crossing the fjord. 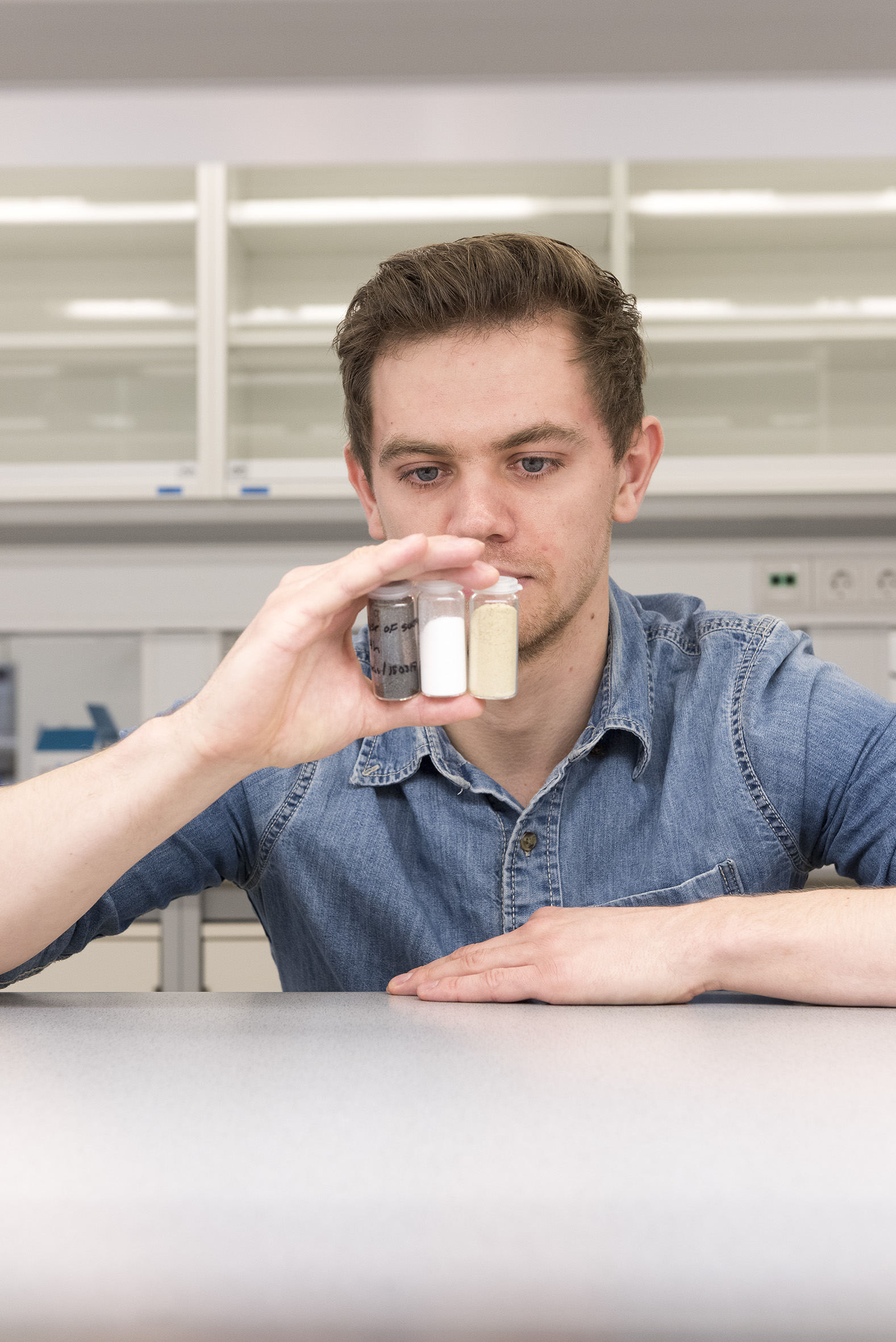 Researchers from the Department of Materials Science and Engineering may have come up with a way to improve the negative electrode of a lithium-ion battery, the anode, considerably. The new anode material, based on algae, has a better capacity, is more environmentally-friendly to produce and will last longer and perform better. Fride Vullum-Bruer had attended a meeting, and afterwards she and a colleague started toying with the idea of using algae in energy production. “We had heard about a project where they used algae in solar panel production to collect light, but they couldn’t make it work due to the many challenges associated with the algae. We were inspired and didn’t let their results deter us, and I started incorporating this into my research on battery technology.” The team has been granted funding from NTNU Discovery to test the material in a full-cell battery prototype. “This funding is critical in terms of taking this technology to the next level,” says Susanne Jäschke, who is the TTO project manager. The project now has a name: Diatoma. 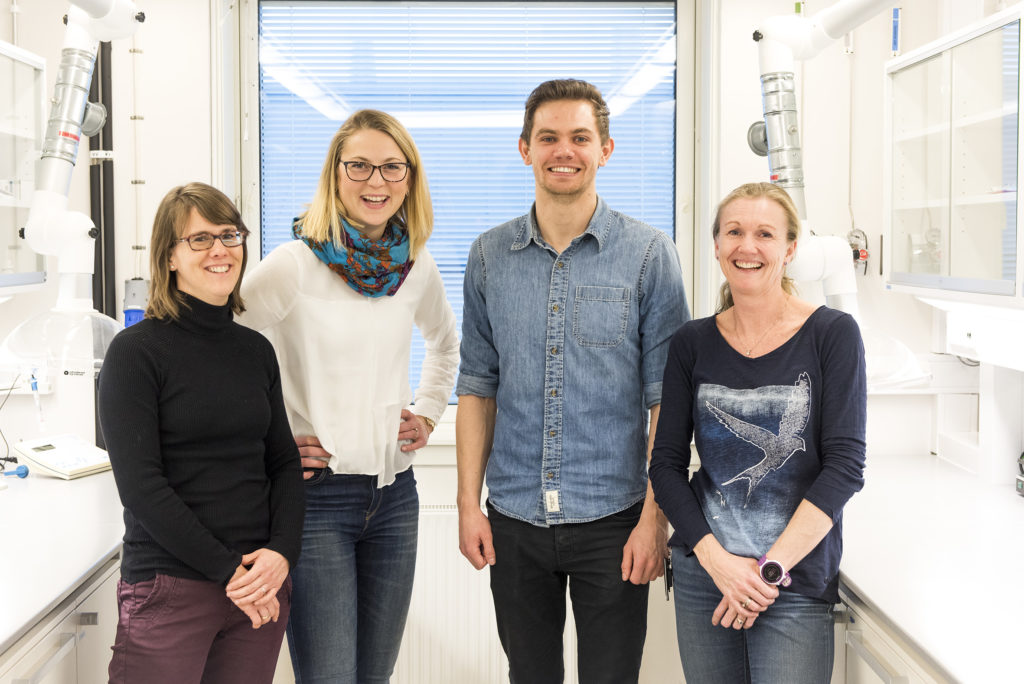 This is the team who wants to take batterie tecknology to a new level. From left project manager Susanne Jäschke from TTO, Entrepreneur-in-Residence Kristin Lønsethagen, founder Andreas Norberg and inventor Fride Vullum-Bruer.

GREENER AND MORE AFFORDABLE
The biggest challenge we face with current anode materials, is that we have reached the limit in terms of performance; we can’t get them to store any more energy. Today’s batteries are a bottleneck in the renewable energy shift currently sweeping Europe. New materials are needed to improve quality. In addition, current materials are not very environmentally-friendly. The most commonly used material is graphite, which is either mined from fossil resources or synthetically manufactured with a considerable carbon footprint. Production of battery electrodes also requires dangerous chemicals, and the high cost of these electrodes is a reflection of the stringent health and safety requirements that apply to their production.
“So now, when we are introducing a better, less expensive and more environmentally-friendly anode by using renewable raw materials, and it also has a better capacity than any other anode commercially available today, we have really eliminated several major problems with the current technology,” says Fride Vullum-Bruer, smiling.

MIRACLE ALGAE
So what is it about the algae that makes this possible? These algae grow in both fresh and salt water and they are a renewable resource. We are able to use their natural nanostructure in the battery electrode without much refinement. Normally it takes years in the lab to replicate nature’s nanostructures, but in this case they can be implemented in the process straight away. In addition, we use a binding agent in the electrode, which enables us to use water as a solvent, instead of the toxic chemicals used in today’s battery production.
The final product will therefore include less hazardous substances than conventional batteries and have a much smaller carbon footprint. Fride Vullum-Bruer filed the patent application in 2015. “Since my co-inventor and postdoctoral fellow moved back to her home country, we didn’t have anyone to continue developing the technical side of things. Recently, however, we were able to bring in Andreas Norberg, a dedicated entrepreneur with a background in nanotechnology. 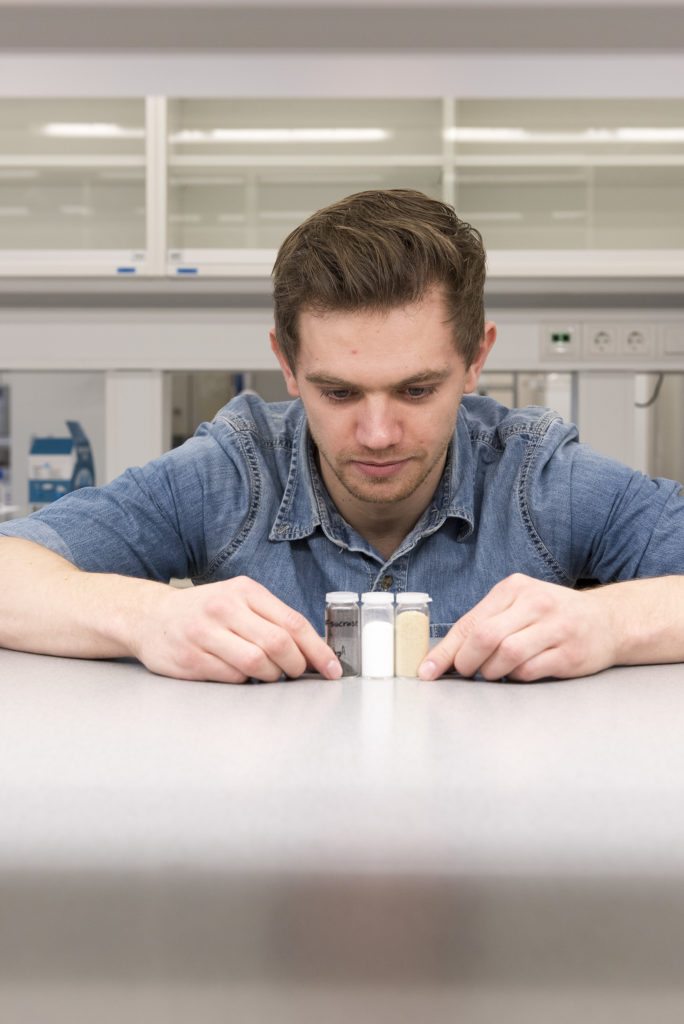 Founder Andreas Norberg is the one to take the technology from the lab to fabric.

INDUSTRY READY
Major industry partners, who manufacture battery solutions for maritime applications in Trondheim, contribute to the project as consultants, and they are virtually champing at the bit to test the new technology. “It’s really a dream situation,” says Jäschke. “In time, we have plans to establish production of the anode material in Trondheim. The technology holds great promise, but there are some challenges we hope to resolve in testing.” These challenges will be sought resolved by building a full-cell prototype with the new anode material and a standard cathode to confirm that this type of battery has a capacity up to 40 percent higher than commercially available batteries with a graphite/carbon anode.
“We have already proven that the anode material can handle 1000 cycles of charging and discharging, which is a very good starting point for further development,” says Kristin Lønsethagen, entrepreneur-in-residence at TTO, who also has a background in nanotechnology. “Now we just have to go big and prove superior performance in a full cell,” Norberg concludes. 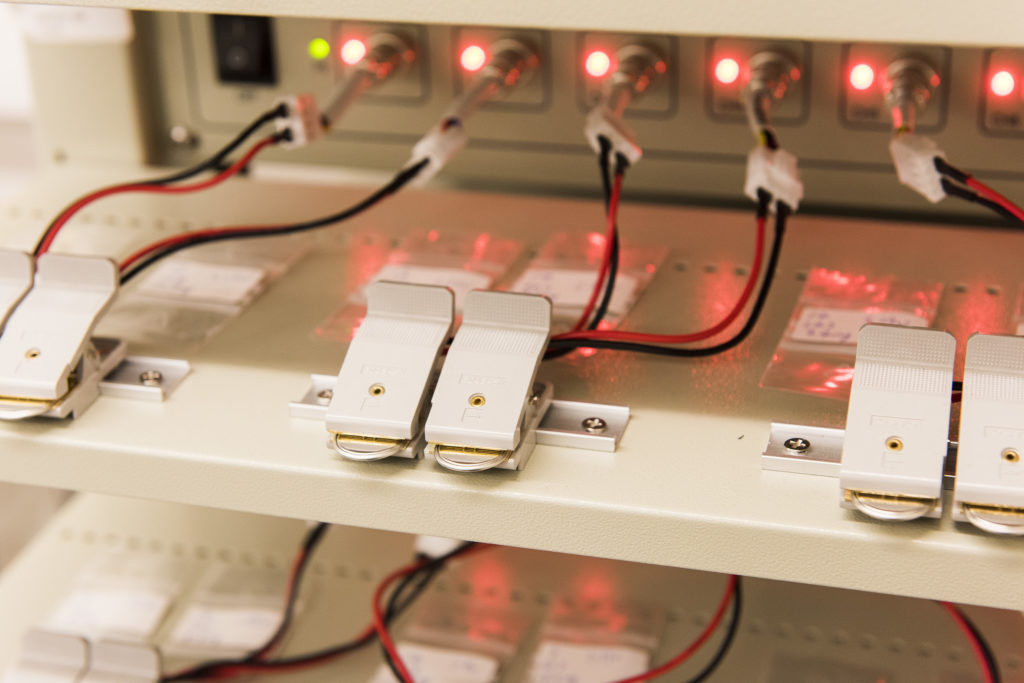 FACTS
All batteries consist of an anode, which attracts electrons, a cathode, which emits electrons, and an electrolyte solution, which transports the ions between the two. In a rechargeable battery, the anode and cathode are defined by their cell reactions during discharge. The anode in a Li-ion battery is usually made of carbon. The lattice structure of carbon is ideal for capturing lithium atoms.