The conventional method for attaching the stomach to the oesophagus after cancer surgery was not good enough. Solution: A new invention for stabilization in surgical staplers. 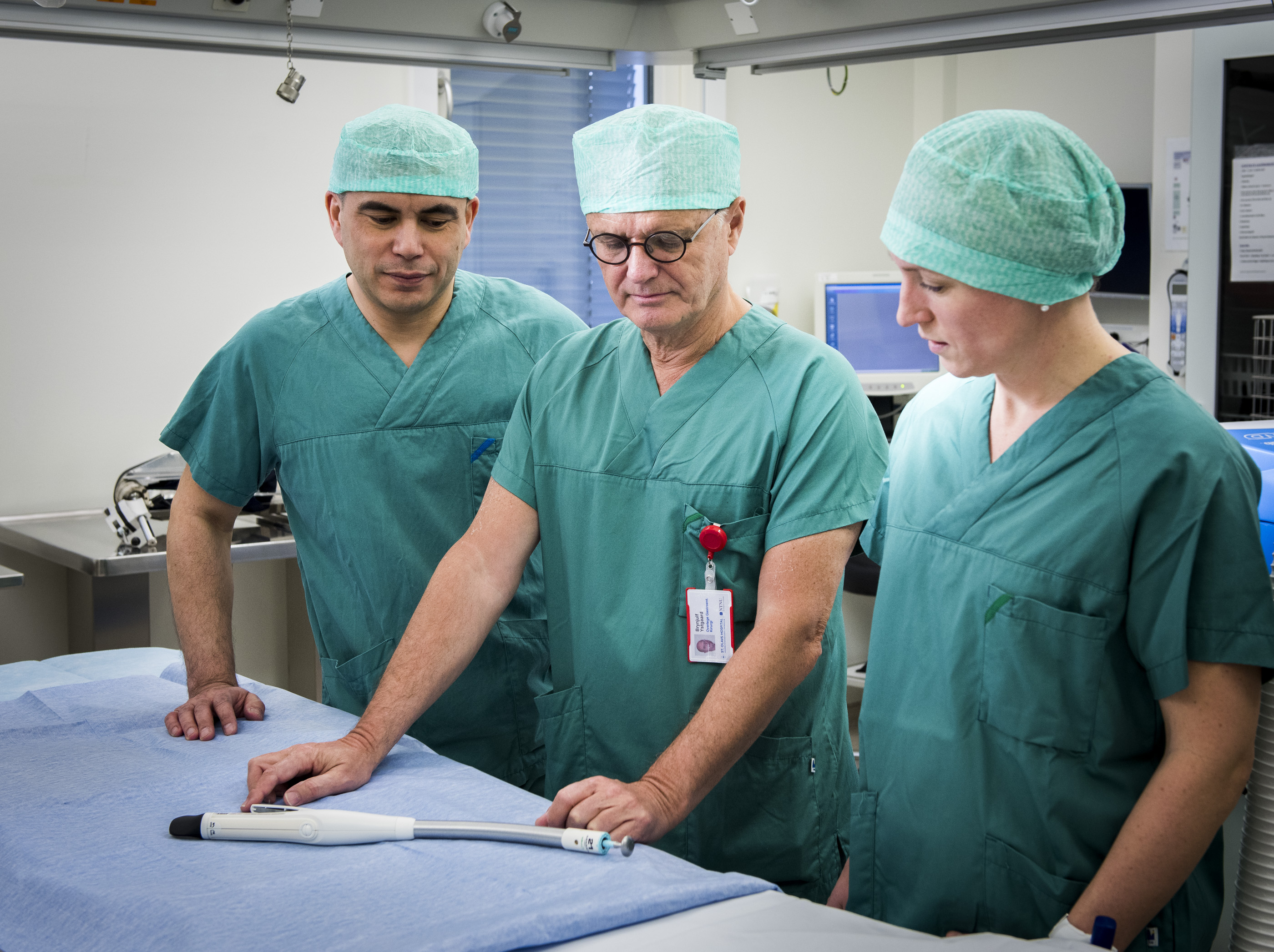 For many years, gastric surgeons Brynjulf Ystgaard and Lars Cato Rekstad have worked side by side in the operating rooms at St. Olav’s Hospital in Trondheim. Many of their patients have gastric or oesophageal cancer. During surgery, cancerous tissue is removed before the healthy tissue is joined together. Surgical staplers are used to join the tissue, allowing food and stomach contents to flow freely past the joint, or anastomosis, after surgery. This type of surgery is complex and risky. Achieving a good anastomosis is critical. Any leakage of stomach contents into the chest and/or abdominal cavity is a serious and potentially fatal complication. Worldwide, the anastomotic failure rate is as high as 10 percent. The cost of this is high, as it results in prolonged hospitalization, and patients often need intensive care for many days.

Improving the mechanism
They know first-hand that the instruments currently available are not perfect; surgeries take longer to complete, and the risk of leaks is relatively high. The risk of leaks from stapled anastomoses is regularly discussed at conferences, and a better solution for this type of instrument is in high demand.

“We have talked about this many times, and after a conference in Stockholm in late 2015, we came up with the idea that our current prototype is based on,” says Rekstad.

An improvement to the stapling mechanism that joins the healthy ends of the oesophagus and stomach could significantly reduce the time the patient is under anaesthesia, as well as reduce complications from the surgery. In addition, they are hoping it will simplify the procedure itself. 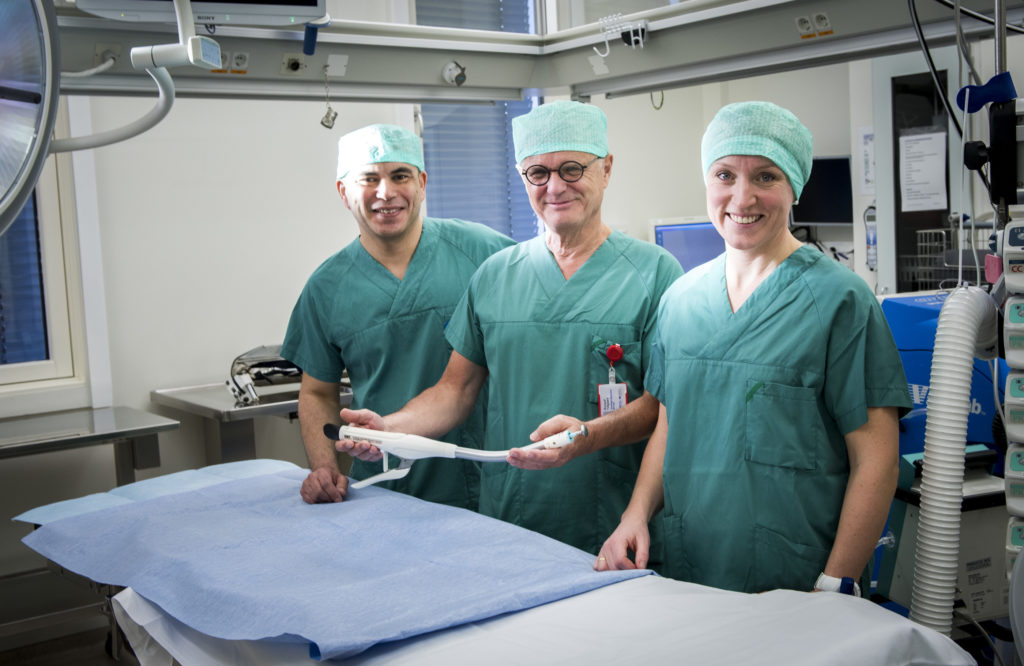 Challenges
Today, the ends of the stomach and oesophagus are joined together using a circular stapler once the cancerous tissue has been removed. The problem with the conventional instruments is that they require a cylindrical anvil disc to be inserted through the oesophagus, while the stapler is inserted from below, attaching to the disc. The disc has to be the same size as the outer circumference of the stapler, in order to provide support for the staples so that they fold correctly. This creates problems when it is time to pull the disc out past the stapled area. (See fact box)

Widely used instrument
Surgeons the world over have used different variations of this instrument for decades. The concept was developed in Russia in the 1950s. Considerable improvements were made in the 1980s, primarily by surgeons in the United States. In their current version, these instruments have been used for many years in open surgery, but with the increasing popularity of laparoscopic surgery, there is increased demand for instruments that are easier to use and that reduce the risk of anastomotic failure.

Path of development
The two of them had previously contacted TTO to find out whether this could be a relevant project. They submitted an application for seed money from NTNU Discovery. They have been granted seed money for two rounds, at a total of NOK 300,000. “These grants were all-important for us,” Ystgaard says. “We were able to go into the development phase straight away, before moving on to market surveys and patent applications in the next round.”

“We concluded that the circular disc would have to be replaced with a foldable structure, making it possible to get to the site from one end. That way, we wouldn’t be dependent of having to insert something through the oesophagus. It must also be possible to fold it up and pull it out gently after completing the stapling,” Ystgaard explains. “We had a specific idea, but it proved unable to withstand the forces required to complete the stapling. We had underestimated the forces involved in the stapling process,” Rekstad says. “But we knew we were on to something.”

No competition
They scoured the market for similar solutions, but found nothing that could address this problem. “There is a slew of patents involving umbrella solutions, for example,” says Rekstad, “but no actual products have been developed.” Developments have slowed in recent years, and the instruments have remained largely unchanged for decades.

The team behind Koppler secured a NOK 1,140,000 main project grant from NTNU Discovery in 2016, and they are now well underway to achieving their dream.

“Together with our partner, development company Inventas, we have completed three development rounds, and each round, we have been able to move one step forward,” says Rekstad.

In the spring of 2017, the team is going to the United to negotiate with some of the major manufacturers. 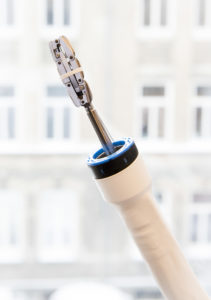 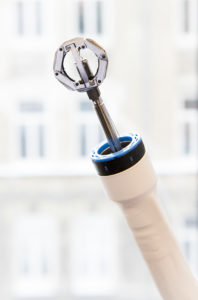 Facts
This is how the current mechanism works:
The problem with today’s instruments is that they require insertion of an anvil through the oesophagus, which is attached to the stapler once the tumour has been removed. The anvil provides necessary stabilization during the stapling process, but it creates a problem when it has to be pulled out past the stapled area. There is considerable risk of damaging the anastomosis. In addition to the risk of leaks, insertion of the anvil from above is undesirable, as it prolongs the surgery. Surgical duration can be significantly reduced if the anvil is integrated in the stapler, eliminating the need to insert it from above. (illustration)

Market
The primary market is countries with a well-established health care service, primarily Europe and the United States. The concept was initially conceived in connection with oesophageal surgery, but, in principle, the new solution can be applied to the entire GI tract. Colorectal cancer is the third most common type of cancer worldwide, with approx. 1.4 million new cases diagnosed every year, whereas oesophageal cancer is the eighth most common type of cancer, with approx. 500,000 new cases diagnosed every year.