Express boats are common in Norwegian fjords, but unfortunately they are not particularly efficient or environmentally friendly. They use more fuel per passenger mile than an aeroplane.  Now, a new system inspired by fish tail fins may revolutionize vessel propulsion. 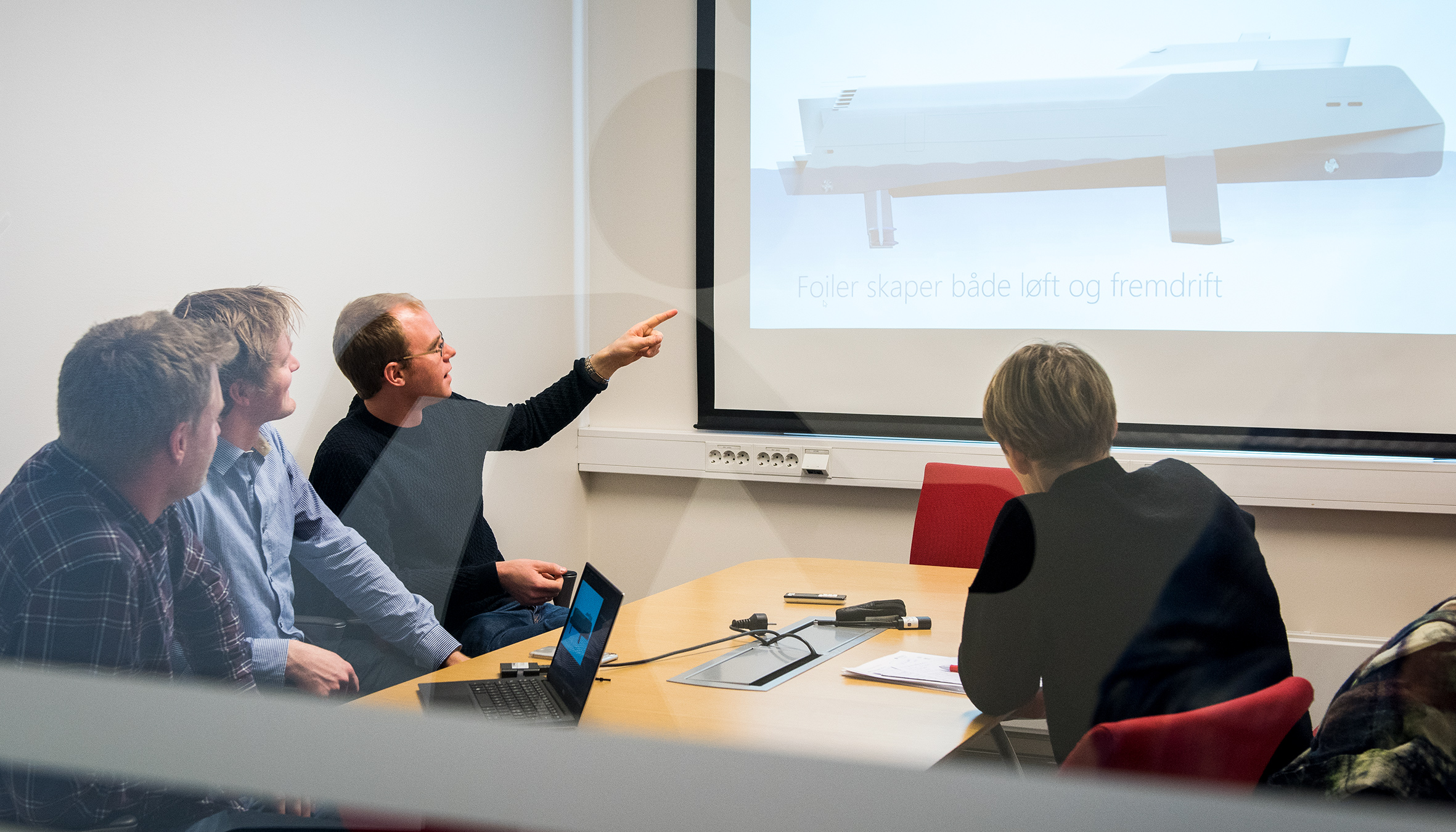 Doctoral candidate John Martin Kleven Godø wants to fix inefficient express boat propulsion. “I’ve looked into other approaches to make express boats faster and more environmentally friendly,” says Godø. Working closely with his co-inventor, Professor Sverre Steen, they developed a concept based on foils or fins underneath the boat, moving in a pattern similar to that of dolphins or whales. These foils create both lift and propulsion.

Godø has been toying with the idea of a more fuel-efficient boat since he was a little boy, when he found that his boat used way too much fuel. It had to be possible to make an energy-efficient, fast boat!

Lifting the boat out of the water considerably reduces resistance, which makes it possible for the propulsion system to far out-perform conventional solutions with propellers or water jets. As an added bonus, wave-induced movements will also be reduced, increasing comfort compared to today’s standards.

Strong expertise
At the Department of Marine Technology, where Godø is completing his doctorate, they are eager to test these kinds of ideas. Staff at this department helped realize the last big revolution in express boat development—the hydrofoil—many years ago, so there is no shortage of expertise in this community.

“Since the development of the hydrofoil not much has happened, but now it looks as if we’re onto something. Primarily for the leisure craft market—that’s why we’re hoping to take the express boat sector to an entirely new level,” says Fredrik Storflor Moen, who is project manager for Flapping Foil at NTNU Technology Transfer.  He also points out that the Department of Marine Technology is on board, sharing the costs of this project.

Neither propeller nor water jet
By having the foils/fins underneath the boat lift the entire hull out of the water, water resistance is reduced dramatically. Combined with moving fins, which propel the vessel far more effectively than propellers or water jets, the power requirements of the average express boat can be reduced by as much as 30–50 percent. If the energy is provided by diesel engines, this translates to a reduction in CO2, NOx and SOx emissions of 30–50 percent. Electric boats would have a much longer range, upwards of double the range that can be achieved with conventional hulls and propellers.

“Our invention represents a big leap toward the many goals of emission reductions and even zero emissions in Norwegian waters in the years to come. The Port of Oslo, for example, aims to be a zero emission port by 2020. A more efficient propulsion technology can increase the range for a given unit of energy, thus contributing to achieving these goals by reducing the cost of batteries or fuel cells,” Moen says. 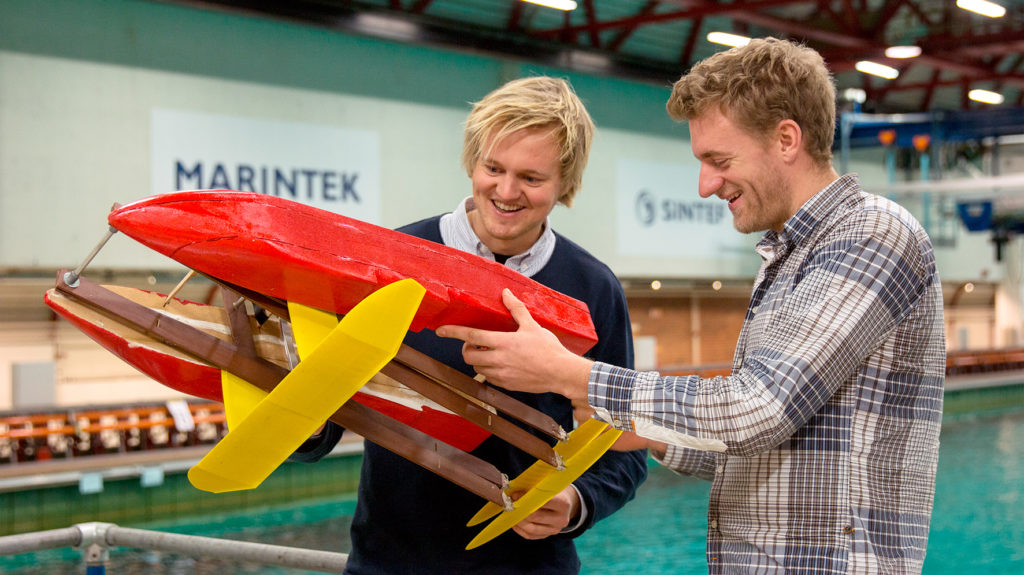 Simple model paid off
To test his idea, John Martin Kleven Godø built a model with scrap material he found at SINTEF Ocean and scavenged from the dorm rooms of his friends, and he was able to prove that his concept was valid. When TTO came on board, they applied for a NOK 1 million grant from NTNU Discovery for a simulation project to produce more accurate data.

“The results from the NTNU Discovery project will be an important milestone as we’re working toward our goal, which is to find the most energy-efficient method for moving forward on water. Our work on computer simulations for the foil propulsion system will culminate in a system verification, optimizing the design and patterns of movement. This is a crucial step before we move on to verification using models,” says Jarle Andre Kramer, who is supervising this stage of the process. The funding from NTNU Discovery has made it possible for both Godø and Kramer to suspend working on their doctorates for six months so they can help drive the development of Flapping Foil forward.

“The industry we’re focusing on is often seen as conservative, and radical transformations are not a common occurrence. But they’ve been surprisingly open to our ideas so far. We’ve received good feedback, and we have attracted considerable interest. We’re really pleased with that—for now,” Storflor Moen says.

“Our intention is to become a propulsion technology supplier, so our next goal is to build a small demo model, approx. 8 metres long, weighing in at 2–3 tons. This will help us prove that the technology is valid in other dimensions, sizes and weights than what we’ve proven so far,” Kleven Godø says.

They have teamed up with Siemens and Brødrene Aa. The former develops electric engines and is a key strategic partner for us. Brødrene Aa is a shipyard, and they build carbon fibre boats. We hope to get construction started relatively soon.  The idea is that, in time, some boats on shorter routes can switch to electric engines, which would be the most environmentally friendly. The technology isn’t quite there yet, but it’s coming.

“Norwegian express boats are already among the best in the world in terms of environmental impact, but there is still room for improvement, especially in terms of energy consumption. In this area we should be able to get much better fuel-efficiency, and that’s where we come in.”

What distinguishes Flapping Foil from other, similar technologies is the following: